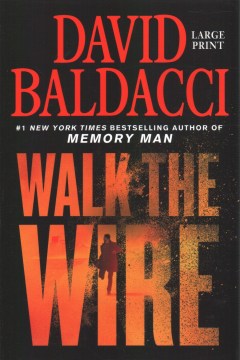 Disappointed in the 'muddiness' of characters and plots in parallel throughout the book. Not the usual Baldacci I have read and enjoyed. It would have been better in 2 books.

Another great Memory Man novel but you need to pay close attention to this one! I agree with some critics thaqt this could have been two separate novels!

I have read all of Baldacci's books and loved most...This one is a far cry from any of his previous books. Is he asleep at the wheel or is someone else writing for him now, i.e., like Patterson.
CL_kcls (below) expresses my opinion totally!

I too was excited to see Will and Jessica and Blue Man, but this is almost two books in one. A LOT of killings, multiple plots and perpetrators.
I had to re-read the ending just to sort out who did what.
Think this book got overloaded. Acceptable, but not over 3 stars.

A bit slow and convoluted. It drags on , through the middle part. Too many unnecessary characters and plot twists which seem to be there only as filler. Jamison seems a bit weak. Definitely not one of Baldacci's best. Three stars is maybe too generous.

I was excited to read the newest Amos Decker and Alex Jamison book, 'Walk the Wire'. Then, Baldacci added Robie, Reel and Blue Man to what appeared to be an interesting case made more interesting by their appearance!

But, Decker himself inadvertently summed up the truth about 'Walk the Wire very well: "Every time he felt he was gaining traction, another event would force them into an entirely new direction. Part of that was happenstance, he was sure. And he was also certain that part of it was intentional."

There are more wayward plots in this book than mole tunnels in my yard. Most of them are irrelevant to the initial case, yet they all come to near immediate resolution, some before you know it happened. At one point, I thought I put my bookmark in the wrong place and missed something big. I didn't. And frankly, you don't need a flow chart to keep track of my moles, but you will with all the characters, plots and moving parts in Walk the Wire.

Amos Decker seems to be missing a step or two. He is more bumbling than we know him to be. Baldacci subtly hints his condition is changing. If that's so, it makes Decker less interesting, at least in this book.

My other disappointment with 'Walk the Wire' is the utterly banal and sophomoric writing that's so unlike David Baldacci, especially the dialogue between characters. "I loved you," shouted Southern, tears spilling down her cheeks. "Like I have never loved anyone ever. I was looking forward to spending the rest of my life with you."

Southern tightened her grip on Dawson's throat. "I loved you. That's why I did it. It was all for you! You!"

Gag. Especially in the particular circumstances in which that conversation takes place.

Despite characters I enjoy immensely, I am sad to say 'Walk the Wire' is not up to par.

A gracious 3 stars. Do better, Baldacci.

I used to absolutely LOVE Mr. Baldacci's books. Sadly, not so much anymore. Walk the Wire is probably the most convoluted, implausible story I have read in a long time. There were so many inane plots that my eyes hurt from rolling them so much.

My first thought: What does the title "Walk the Wire" have to do with this book? This was a typical Baldacci - a moderate length book but a really fast read. The main character, Amos Decker - a guy who had a football injury and now has perfect memory and associates colors with certain events and colors, is growing on me. He was such a non-communicator in earlier books that it was hard to empathize with him. I thought the hook-up between him, his partner Alex Jamison, and two characters from another of his series - Will Robie and Jessica Reel seemed fairly awkward. Just having the latter two around to save the lives of the first two periodically doesn't really add much to the story. Connecting a North Dakota fracking operation, Anabaptist communal farmers, a Russian spy, and ton of foreign mercenaries had to be hard to do - and the author only did a mediocre job of it. The whole story just kept getting more and more convoluted and the body count kept getting higher and higher. The final solution was so bizarre and came so far from left field that I couldn't even try to explain it. I decided I just and to accept it and move on. Certainly not one of David Baldacci's better books.

All I'm going to say is; Amos Decker, Alex Jamison, Will Robie, and Jessica Reel together! Thank you Mr Baldacci.