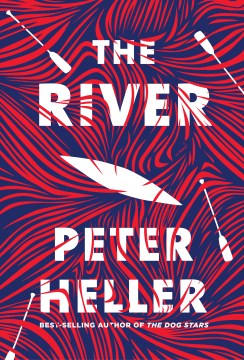 "Wynn and Jack have been best friends since freshman orientation, bonded by their shared love of mountains, books, and fishing. Wynn is a gentle giant, a Vermont kid never happier than when his feet are in the water. Jack is more rugged, raised on a ranch in Colorado where sleeping under the stars and cooking on a fire came as naturally to him as breathing. When they decide to canoe the Maskwa River in northern Canada, they anticipate long days of leisurely paddles and picking blueberries and nights of stargazing and reading paperback Westerns. But a wildfire making its way across the forest adds unexpected urgency to the journey. When they hear a man and woman arguing on the fog-shrouded riverbank and decide to warn them about the fire, their search for the pair turns up nothing and no one. But: The next day a man appears on the river, paddling alone. Is this the man they heard? And, if he is, where is the woman?"--Provided by publisher.
Publisher: New York : Alfred A. Knopf, 2019
Edition: First edition
ISBN: 9780525521877
0525521879

Recommended by Elaine, Beavercreek Community Library: "This book takes place in August in the Canadian wilderness. Two men go on a 'relaxing' canoe trip but encounter more challenges than they ever imagined."

This is one of the best books! The descriptions are so evocative and the characters are developed with subtle interactions. The action keeps the story moving perfectly. I look forward to reading his other books.

I truly enjoyed reading this book, it pulled me in right from page 1. Jack and Wynn have a fantastic relationship and both have their own strengths, they compliment each other well. The setting was detailed enough to make me feel a part of the journey.
Like other books that pull me in like this, I was sad when I finished because it was such a good read.

Didn't enjoy the writing of this novel. Was very hard to get into.

I enjoyed this book somewhat: parts of it were good. It's an interesting outdoor adventure. The writing style was a bit basic at times though.

For me, the story had a slow start, but then I couldn't put it down! I loved the setting, Jack and Wynn, the storytelling. Beautiful. I won't give away anything, but man, I was thinking about this one long after I finished it.

It almost didn’t keep my attention starting off very slowly but picking up a little in the middle. I am glad I didn’t give up on it but it was still a little less enjoyable than I expected Just not my kind of story

I got about 4-5 chapters in when I decided if the book had a story to tell it would have told it by then so I dropped it to find something with... more.

To my mind, there’s nothing cozier than reading a creepy book in a tent by flashlight, as a storm rolls gravelly thunder off the distant granite hills. Each time I camp, I hope for at least one such night, and keep my fingers crossed one of the books I brought fits the bill. Reader, I have found the book for this task.

Peter Heller’s slim novel, The River, is almost a lot of things, and perfectly itself. It’s almost a thriller, but it’s too literary and emotionally honest. It’s almost literary fiction, but there’s too much adventure. It’s almost nature writing, except there’s a darn fine plot and characters that sear into the imagination.

The plot opens with two men, Wynn and Jack, on a bucket list canoe trip down the Maskwa River in Ontario’s far north, headed toward Hudson Bay. Best friends since their first year of college, both are completely at home in the wilderness. Heller himself is avidly outdoorsy, and his knowledge of backcountry survival techniques combine with spare, crystal clear prose to make the dense, murky blue-green wilderness come terrifyingly alive. He captures the exact sound of water running off a paddle in a deadening fog so accurately it makes your hair stand up. This talent lends the first portion of the novel a serene calm we all wish we could capture every trip we take.

It doesn’t take long for the calm to unravel, though. Soon enough, the men meet a couple of rough men in a motorized boat who give them the creeps. Later, they scale a tree when making camp for the night, and discover a large forest fire bearing down in their direction. They furiously calculate what they’d need to do to get past the fire – they’d need to move at an almost inhuman pace. Staying longer isn’t a possibility, as the cold is already beginning to settle into shortened August nights. They resolve to move on fast, but find themselves in a dense fog in the wind-tossed dark – more unsettling since fog and wind are an unnatural pairing. As they fight the whitecaps, they hear what sounds like a domestic dispute. Initially they press on, but then decide they need to find the couple, check on them, and warn them about the fire. They’re nowhere to be found for a few miles - until they find the man without his wife, claiming that she died of a fall, but leaving both Wynn and Jack with a sick sense deep in their bellies.

From here, the story condenses and moves so fast the reader can have a hard time stopping to savour the details, but the details are worthy of pause. The further Wynn and Jack move into the wilderness and the closer they get to the fire, the more tangled they become in the lives of the others trapped on the river trying to outrun the fire. The story builds to a conclusion so sublimely wrought it’s seared into my visual memory.

The River is highly recommended to anyone looking for a more literary thriller, especially those with a passion for the outdoors. Read it in a tent on a stormy night in the backcountry, if you dare.