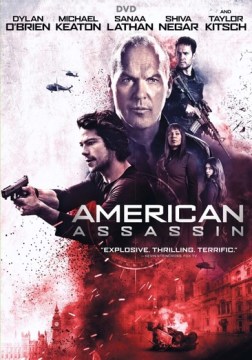 Political and spy thrillers typically involve government agencies such as the FBI or CIA. Political corruption, terrorism, and warfare are common themes. They can also include espionage and conspiracy theories. It's an immensely popular subject, and some of the genre's notable authors are listed below with brief descriptions of their work. Vince Flynn Vince Flynn's Mitch Rapp series… (more)

I wish they'd stuck to the actual plot of the book. Would've been a much better movie. Highly suggest picking up the audiobook and NOT judging the book series by this movie.

Fluff. Overdone. 'Boy' with grudge won't adhere to trainer's instructors, CIA wrings their hands 'not knowing what to do', they send this loose cannon in (anyway) and the non-stop blood-squirting begins. Reality just didn't fly. Film was mostly grunts, moans, BAM's, and a rat-a-tat-tat's.

If you liked Olympus Has Fallen and similar action movies (the far-fetched kind that don't make you think very hard), then I suspect you'll like this one. I'm only guessing, though, because I didn't make it past the half-way mark. (I almost never give up on a movie, but this was just awful.)

If you're looking for a more thoughtful action movie, I recommend any of the first three Bourne movies with Matt Damon. Spy Games is very decent, too, and even the Mission: Impossible movies (with the exception of the second one) are better than American Assassin. The Jack Reacher movies are pretty decent, too, though not exactly about spies.

Even tho' I thought the plot was a little far-fetched, I still enjoyed the film. I liked Michael Keaton and his focus. He had a very strong through line of his character. I enjoyed Dylan, the lead. However, his character was a little way out there: Super strong, Super dude, Super gonna' get even. He played it well, tho'. If something like this really happened, it would not be brushed off so easily or quickly. That part was overlooked for me. I suppose there are so many different things that could happen in our modern society, that, even something like this is not out of the question. The results would be harrowing, but I still enjoyed the film for what it is.

A good action/spy movie. Lots of action with a good story once you get through the first 20 minutes.

it's ok, casting could have been better.

Surprisingly entertaining but the torture scenes are too graphic.

American Assassin was an okay movie, it had actors who played their roles brilliantly. However, the storyline and plot of the movie bought my opinion of the movie down as it was quite dull and predictable and not a thrilling as I expected it to be. The movie was bought somewhat to life well though through the actors who really bought their characters to life, especially Dylan O'Brien and Keaton.

This film is a monstrous frat boy fantasy. A young dude Brown graduate student and his beautiful bride-to-be are gunned down on a resort beach (probably based on the 2015 ISIS massacre in Tunisia). He then dedicates himself to a life of revenge, training in mixed martial arts, and trolling jihadist online chat rooms. Somehow, despite his cyber sophistication, he forgets to put a piece of painter's tape over his laptop camera (don't we all know to do that by now?) and the CIA is spying on him. The CIA recruits him, puts him through a quick assassin's school taught by Michael Keaton, and then sends him on the hunt for some stolen plutonium. That's where he encounters a rogue agent, played by Taylor Kitsch, with whom he battles mano a mano. All in all from what we know of Syria, the CIA spends more time training jihadists than assassins of jihadists. Furthermore, someone who dedicated his life to killing Salafi would not immediately change his focus to battling Shiite Iran. He would be more likely to go to work for Iran.

Great action movie, so if you're looking for something else, don't bother. The story was typical and predictable, however, the fresh faces and the action help you get past the ordinary story line.

Mitch Rapp: We are in beautiful Ibiza, Spain. Beautiful sand, beautiful waves. My favourite shorts and my favourite girl who is about to get... oh my God!

Katrina: Hey! Come on, give it to me!

As far as he's concerned, you're sending him a Section 8 with an ax to grind.
-What happened to that kid on the beach, it changed him. You can't train that into someone. His psych profile is exactly what I've been looking for.
===
You saw those tests.
-Yeah, I saw them.
He's off the charts.
-I've seen off the charts before.
And he's got none of the bad habits he'd have to unlearn if -he had military training.
-Unlearn?
Come on, Stan. You drop one of your Navy SEALs in an urban setting, you can spot the boot camp on them a mile away.
===
Ronnie, Ronnie, Ronnie. There's your first mistake. You never start with a real question. You start slow. You get inside your subject's head.
-Stan, I'm gonna ask you one more time.
There's your second mistake. Number two. You don't say, "one more time." You already...

The book has a much more compelling life changing event for Rapp than the beach scene, From near the start of Chapter 1:

Or that the only way he could cope with the pain of losing the love of his life was to plot his revenge. That every single night before he went to sleep he thought of the network of faceless men who had plotted to bring down Pan Am Flight 103, that he saw himself on this very journey, headed to a remote place not dissimilar from the woods he now found himself in. It was all logical to him. Enemies needed to be killed, and Rapp was more than willing to become the person who would do that killing. He knew what was about to happen. He was to be trained, honed and forged into an ultimate precision weapon, and then he would begin to hunt them down. Every last one of the faceless men who had conspired to kill all those innocent civilians on that cold December night.