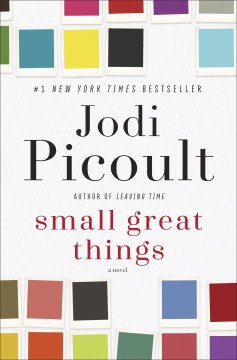 "A woman and her husband admitted to a hospital to have a baby requests that their nurse be reassigned - they are white supremacists and don't want Ruth, who is black, to touch their baby. The hospital complies, but the baby later goes into cardiac distress when Ruth is on duty. She hesitates before rushing in to perform CPR. When her indecision ends in tragedy, Ruth finds herself on trial, represented by a white public defender who warns against bringing race into a courtroom. As the two come to develop a truer understanding of each other's lives, they begin to doubt the beliefs they each hold most dear"-- Provided by publisher.
Publisher: New York : Ballantine Books, [2016]
Edition: First edition
ISBN: 9780345544957
Branch Call Number: FIC Picoult J
Characteristics: 470 pages ; 25 cm

PLEASE READ & let me explain why I had to separate this by race..

I saw black ratings saying how stereotypical the black people were in the book. This is true. I found myself so angry with Ruth and her indifference to race when she provided so many life examples where she noticed race in her everyday life. Then she was surprised and in denial that a case come onto her because of race... like come on girl... you cant be that stupid to make those connections.. and this goes on for a long time too. Black people know. That was not realistic even for the black people who are assimilated into white culture or daily life easily, especially when you had the life that Ruth had (with her mom—a maid working for a rich, white family, another stereotype—and growing up and actively noticing the difference at every stage) and then acknowledging her sister and her neighborhood and life—which is another reason I didn’t like this. Her sister is portrayed as ghetto with no sense, yet is pro black and ‘woke’. I hate that the pro black, woke woman couldn’t be successful or looked upon positively other than helping Ruth get government assistance and taking in Ruth’s son when she went to jail... that annoyed me.

My white rating is rated higher because if white people read this book, I feel as if this book speaks more of their language and through their perspectives. I could have just rated this book 2 stars and said that it was stereotypical and made me angry at the representation and be done, but I thought... the white people in this book are also stereotypical. A naive public defender who has never even thought about race because it doesn’t directly affect her life (altho I believe that white people like this are what is hurting the fight for racial rights as they say they know there is a problem but they don’t /know/) and then a radical skin head. I mean.. these two white people do not categorize all white people either.. Hopefully white people think like this when feeling like those 2 characters didn’t represent their race and think about us.. (did that fly over your head?) This book raises awareness for white people and black struggle even for the ones who ‘assimilate’ well (aka the accepted black people). It’s a great eye opener on the differences, even in stereotypical forms, but it’s a great first step—especially if you are white and do not have many people of color around you.

Even for my white rating I didn’t put 5 stars because I thought the book had too much detail for things that didn’t matter. Like the McDonalds shifts and what she had to do. Things that just put waaaaay too much detail that was unnecessary. I also felt that if I didn’t listen to this on audio, I probably would have DNF’d the physical book.

All in all, great book for white people for awareness and thought processes about race and black people. Black people... go ahead and pass.

I was crying by the end of the first chapter...so was my husband

I checked this book out on a whim, because I liked another of the author's work. I was not even aware of the plot -- oddly enough, I started reading it shortly after the murder of George Floyd, and completed it while the Black Lives Matter protests raged in the weeks that followed. It felt like an appropriate fictional compliment to the hunger for racial awareness/equality on everyone's mind & pain in their hearts right now.

This author is white, and also I am a white reader, so perhaps there is room for interpretation, but my understanding is that the author researched her characters by sitting down & listening to the stories of real life folks who have lived the character's stories.

Highly recommended, if only for the amazing ending.

I found this book to be disturbing, but in a good way. I have never thought of myself as being racist, but this book made me very aware of how much I take for granted. It is hard for me to understand how some people are so prejudiced, but this novel showed me that it is definitely real. The author did an excellent job portraying the different characters.

Stunningly written. The time and research put into this story was worth it! I felt Picoult portrayed the characters accurately and was captivated by this book. I would recommend to everyone I know.

What I love about Jodi Picoult's novels is that you become intimately entwined with each character as they work through a controversial or life shattering experience. Small great things put me right there with Ruth Jefferson. When she lost her mother, I cried and when she came out on top after the trial I celebrated!

Jodi Picoult tackles another social issue. This time its race. Ruth the only black nurse on a neo-natal ward is not allowed to take care of a new baby at the request of the mother. Short-staffed she ends up watching the baby in the nursery. The baby stops breathing and Ruth ends up being charged for murder. Like all of Picoult’s works it is impossible to read without getting emotionally involved. The story is told from three points of view—Ruth’s, her public defender and the white supremacist father of the baby.

A good story even though a little heavy on racism. Learned some things about labor and delivery. P1 means number of pregnancies and G1 means number of deliveries that are not clearly explained in the book. One can also see the white supreme attitudes in the book even in today's society. The book gives the reader something to think about concerning their thoughts on racism.

It is commendable that Picoult tackled racism in this book and, regardless of how predictable her plots can be, they're still engaging. Yet I kept rolling my eyes as Picoult repeatedly emphasized her moral / message as she galloped roughshod as the social justice warrior. I’d like to be given credit for my intelligence and don’t need to be hit over the head with a 2 X 4 … with her ubiquitous italics. Consequently her message didn’t make an impact on me.
Unlike Ta-Nahisi Coates’ "Between the World and Me". Now there is a thoughtful book about racism!
Perhaps I’ve read too many of Picoult’s books (7) in the past several years and if it had been my first I would have liked it. But they all feature the same tedious format – chapters from each main character’s perspective, excessive backstory and personal anecdotes. All feature millions of metaphors that stretch out the word count, and metaphors whole paragraphs long whether or not it fits the character’s voice. Where is her editor?! This will be my last Picoult book.

“Freedom is the fragile neck of a daffodil, after the longest of winters.” - p. 449

“Admitting that racism has played a part in our success means admitting that the American dream isn’t quite so accessible to all.”

“It’s the difference between dancing along the eggshell crust of acquaintance and diving into the messy center of a relationship. It’s not always perfect; it’s not always pleasant—but because it is rooted in respect, it is unshakable.”

“You say you don’t see color…but that’s all you see. You’re so hyperaware of it, and of trying to look like you aren’t prejudiced, you can’t even understand that when you say race doesn’t matter all I hear is you dismissing what I’ve felt, what I’ve lived, what it’s like to be put down because of the color of my skin.”

“Equality is treating everyone the same. But equity is taking differences into account, so everyone has a chance to succeed.”

“In a lot of ways, having a teenager isn't all that different from having a newborn. You learn to read the reactions, because they're incapable of saying exactly what it is that's causing pain.”

“It just goes to show you: every baby is born beautiful.
It's what we project on them that makes them ugly.”

pink_flamingo_961 thinks this title is suitable for 13 years and over

This stunning new novel is Jodi Picoult at her finest--complete with unflinching insights, richly layered characters, and a page-turning plot with a gripping moral dilemma at its heart. Ruth Jefferson is a labor and delivery nurse at a Connecticut hospital with more than twenty years' experience. During her shift, Ruth begins a routine checkup on a newborn, only to be told a few minutes later that she's been reassigned to another patient. The parents are white supremacists and don't want Ruth, who is African American, to touch their child. The hospital complies with their request, but the next day, the baby goes into cardiac distress while Ruth is alone in the nursery. Does she obey orders or does she intervene? Ruth hesitates before performing CPR and, as a result, is charged with a serious crime. Kennedy McQuarrie, a white public defender, takes her case but gives unexpected advice: Kennedy insists that mentioning race in the courtroom is not a winning strategy. Conflicted by Kennedy's counsel, Ruth tries to keep life as normal as possible for her family--especially her teenage son--as the case becomes a media sensation. As the trial moves forward, Ruth and Kennedy must gain each other's trust, and come to see that what they've been taught their whole lives about others--and themselves--might be wrong

Coarse Language: This book does use common swear words as well as the n-word