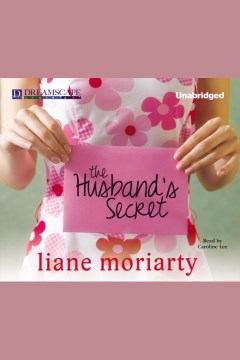 Imagine that your husband wrote you a letter, to be opened after his death. Imagine, too, that the letter contains his deepest, darkest secret--something with the potential to destroy not just the life you built together, but the lives of others as well. Imagine, then, that you stumble across that letter while your husband is still very much alive.Cecilia Fitzpatrick has achieved it all she's an incredibly successful businesswoman, a pillar of her small community, and a devoted wife and mother. Her life is as orderly and spotless as her home. But that letter is about to change everything, and not just for her: Rachel and Tess barely know Cecilia or each other--but they too are about to feel the earth-shattering repercussions of her husband's secret.
Edition: Unabridged ed
ISBN: 9781624068829
1624068820

I really liked this book......shocking bits, maybe things I should have expected but I didn't! Great reader!

This is the second book I have read from this author. The first was Big Little Lies and I loved it, I loved this book too. The characters are likeable and the story is interesting. I like how the characters storylines intertwine too, just like in Big Little Lies. I really like Liane Moriarty's writing style. And I love the ending (epilogue), it was very clever!

really liked this one.

This book was a good read!

This is the first book I've read by Liane Moriarty and I thoroughly enjoyed reading it. I really like how she wove characters' stories around the theme of the Berlin Wall. Very cleverly written and full of suspense! I found it very hard to put this one down. I can't wait to read more of her novels.

My least favorite novel by Moriarty. There were too many ifs and buts, which appeared to turn into excuses, and then a lot of pain and misery because of them.

I got tired of seeing Moriarty's books everywhere and not knowing what all of the love was about, so I started with this one. Greatly enjoyable and readable, and I liked the twists and turns and the brilliant epilogue that tied up what didn't even need tying. I will definitely try more of hers.

I could sympathize with all the characters to an extent, but I felt myself getting frustrated with most of the characters as well as the book continued. I found Rachel the most difficult to relate to as she was so negative towards her remaining family. All that being said, I thought the twist was really good, and my question of how the book was going to resolve kept me intrigued. I did like Tess and Celia for the most part, but sometimes got bored with their stories and was glad when the book began to escalate. This was the first Liane Moriarty book I have read, and I am ultimately glad I read it because I am now better able to understand what readers enjoy about her writing.

I wouldn't call this a "light read" in the emotional sense. Characters in this book work through death and grief, infidelity and betrayal, disappointments and bitterness. Moriarty's gift is not making the dark "too dark" or the heavy "too heavy," but a side effect to this can be shallow character development. Still, she also does a nice job of portraying average humans being a mess and trying, on some level, to do better. Sort of. Several characters fall far (far) short of the "know better, do better" benchmark in The Husband's Secret.

I did overall appreciate it and it kept me entertained for a couple days in audio, but saying that "I really liked it" would be going a bit too far. I much preferred What Alice Forgot or Big Little Lies when all was said and done.

This book was recommended as a "light read" and "entertaining". In some ways it lived up to that description, but in the end I found the characters did not come to life for me and the ending seemed cheap - the author refused to take a stance with her characters, left them bound by experiences that she ultimately denied. I think her point was to underscore the role of belief and perspective but it felt contrived.

There are 3 casts of characters in this book, each with their own story, but Moriarty starts weaving them together about midway through. I had some difficulty keeping track of the kids and who they belonged to. Nevertheless, the theme of secrets prevails. When Cecelia discovers a letter in which her husband confesses to a murder he committed as a teenager, life changes for everyone. His secret will haunt not only him, but the whole cast of characters. If only he had confessed right away!

It is hard to summarize this book without giving away "the secret" but it takes place in Australia and involves the intersecting lives of three women and their families. Amazing revelations near the end!

From the 7/26/2013 Entertainment Weekly review by Leah Greenblatt:

"There's a telltale heart in Cecilia Fitzpatrick's house, but it's not beating beneath the floorboards. It's lodged in a dusty box in the attic, inside a sealed envelope addressed to her in her husband's handwriting and labeled To be opened only in the event of my death.

"Does Cecilia, a generally happy Australian housewife with three young daughters and a booming sideline in Tupperware sales, shrug and put the letter back where she found it? Because this book's title, The Husband's Secret, is what it is (and because human nature is what it is), you know the answer, dear reader: She does not. And it's a credit to the author, probably best known for her 2010 book-club favorite What Alice Forgot, that the secret hits as hard as it does when it's finally revealed more than 150 pages in. Despite its awkwardly soapy title and pink-petaled cover, The Husband's Secret is a sharp, thoughtful read — a sneaky sort of wolf in chick-lit clothing. It's also darker and less whimsical than the twinkly, rom-comish Alice. Liane Moriarty weaves Cecilia's story in with those of two other women in crisis: Tess, a Melbourne marketing exec reeling from a suddenly broken marriage, and Rachel, a widow haunted by the unsolved murder of her teenage daughter more than 25 years earlier.

"But Secret isn't all Down Under noir, either; even as these three women's lives are blown apart, they still have jobs and families and mostly intact senses of humor, and they carry on. When Tess' husband tells her that he's fallen in love with her cousin, who is also her best friend, she can't help thinking how much he looks like her 6-year-old begging for a contraband cookie. ('' 'Please, Mum, I want that sugary treat with all the preservatives and the cleverly branded packaging and I know I promised I wouldn't ask for anything but I want it.' '') The beseeching eyes are the same: '' 'Please, Tess, I want your delicious-looking cousin and I know I promised to be true to you in good times and bad, in sickness and health, but pleeeease.' '' Moriarty ultimately can't resist wrapping up her story lines with a bow that will probably feel too shiny and pink-petal neat for some. But you don't need a husband or a secret to feel for her characters' very real moral quandaries, and to want that shiny bow for them a little bit, too."

ArapahoeDonna thinks this title is suitable for 16 years and over

KathysReading thinks this title is suitable for 16 years and over