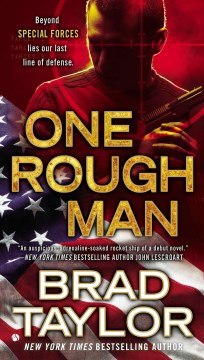 They call it the Taskforce. Their existence is as essential as it is illegal. Commissioned at the highest level of the U.S. government, protected from the prying eyes of Congress and the media. Built around the top operators from across the clandestine, intelligence, and special forces landscape and designed to operate outside the bounds of U.S. law. Pike Logan was the most successful operator on the Taskforce, his instincts and talents unrivaled-until personal tragedy permanently altered his outlook on the world. Pike knows what the rest of the country might not want to admit: The real threat isn't from any nation, any government, any terrorist group. The real threat is one or two men, controlled by ideology, operating independently, in possession of a powerful weapon.
Publisher: New York : Dutton, 2011
ISBN: 9780451413192
9780525952138
0525952136

Political and spy thrillers typically involve government agencies such as the FBI or CIA. Political corruption, terrorism, and warfare are common themes. They can also include espionage and conspiracy theories. It's an immensely popular subject, and some of the genre's notable authors are listed below with brief descriptions of their work. Vince Flynn Vince Flynn's Mitch Rapp series… (more)

Another Tom Clancy want-to-be with nothing original to say and not said very well. Don't quit the day job.

Once in a while I read a book that makes me wonder how it made it to print. This is one of them

Very plausible thriller, no doubt drawn from author's own experience; from "ABOUT THE AUTHOR": Brad served for more than twenty-one years in the U.S. Army, retiring as a Special Forces Lieutenant Colonel. During that time he held numerous infantry and special operations positions, including eight years in 1st Special Forces Operational Detachment—Delta where he commanded multiple troops and a squadron. He has conducted operations in support of U.S. national interests in Iraq, Afghanistan, and other classified locations. He holds a master’s of science in defense analysis with a concentration in irregular warfare from the Naval Postgraduate School in Monterey, California.

"Pike Logan was a member of a covert intelligence operation created to stop terrorist threats without Congressional oversight. He was good at what he did - until a personal tragedy threw him off his game. A chance encounter gets this damaged man going again, tracking down two rogue terrorists with big plans for a very deadly weapon. Booklist, which says that series debut One Rough Man "flows like the best of Vince Flynn," also calls Logan "an action hero to watch," which you can do throughout the series; the latest, Enemy of Mine, was published earlier this year." May 2013 Thrillers and Suspense newsletter http://www.nextreads.com/Display2.aspx?SID=5acc8fc1-4e91-4ebe-906d-f8fc5e82a8e0&N=631593

This high body count novel is an alright read. The excessive human toll and the petty U.S. security department squabbles to the detriment of American lives does little to endear this reader to enjoy this story. The ending, while better is not strong enough to mask all the misery and deaths. 4 of 10 stars

Starts fast and never slows down. Definitely in the couldn'tputitdown category. If you like the Jack Reacher series, then "One Rough Man" is a must read!

Pike Logan left the Taskforce, a clandestine group of special forces experts, when his family was murdered. He meets Jennifer Cahill and gets involved in locating a WMD, a weapon of mass destruction. Fast-paced, good kick-butt action, and interesting characters. If you liked this book, look up Vince Flynn's books.

What a great read! He brings separate events together as believable ending. Lots of action for you Brad Thor fans!!

First book by Brad Taylor I've read, but it won't be my last. Very good story and the ending flows nicely into a sequel. Great way to spend a few days.

The message went out to a Yahoo! address, where it would sit for a day, then be forwarded to another address, then another, before being transferred to a thumb drive and driven across a border to another Internet café, sent again to another account, transferred via cell phone verbatim, then copied to a CD, and eventually find its way into the hands of Al Qaeda leadership.

Back when I was operational, I had a quote from George Orwell hanging inside my Taskforce locker that defined the essence of what I believed I was: People sleep peacefully in their beds at night only because rough men stand ready to visit violence on those who would do them harm.

He had seen the sausage factory of decision-making by the inner circle of the U.S. government and determined it was a recipe for failure. What was needed was decisive action, without a bunch of quibbling from Congress, or, heaven forbid, from the great unwashed of the American electorate.

Every computer file, such as JPEG, MP3, or WAV, has unused data streams within itself, basically empty pockets that serve no purpose. The steganography program simply fills up this empty space with the data that one wishes to hide. Thus, while the picture of Aunt Sally still looks like a picture of Aunt Sally, someone who knows there is hidden information within the picture can extract and reconstruct it.

“Don’t kid yourself, sir. We’ve been lucky. Ever since 9/11 we’ve been hunting terrorists more concerned with their place in history than conducting a well-thought-out attack. They’ve been happy just to shove some explosives in their underwear. This guy getting so close to radiological material scares the shit out of me. Some lone wolf gets his hands on WMD and his place in history won’t have to be well thought out.”

The greater good had been used to defend a lot of actions in the past, including Pol Pot and Hitler. In contrast, the constitution of the United States itself was based on the individual—every individual. When does the greater good become evil? When was it okay to kill one innocent to protect many? When the many said so? Or when the one has a vote?

SF_READER thinks this title is suitable for 16 years and over