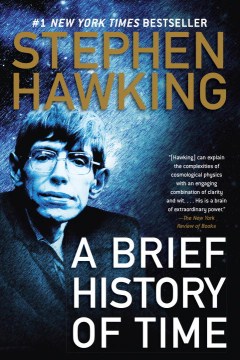 A Brief History of Time

"In the ten years since its publication in 1988, Stephen Hawking's classic work has become a landmark volume in scientific writing, with more than nine million copies in forty languages sold worldwide. That edition was on the cutting edge of what was then known about the origins and nature of the universe. But the intervening years have seen extraordinary advances in the technology of observing both the micro- and the macrocosmic worlds. These observations have confirmed many of Professor Hawking's theoretical predictions in the first edition of his book, including the recent discoveries of the Cosmic Background Explorer satellite (COBE), which probed back in time to within 300,000 years of the universe's beginning and revealed wrinkles in the fabric of space-time that he had projected." "Eager to bring to his original text the new knowledge revealed by these observations, as well as his own recent research, Professor Hawking has prepared a new introduction to the book, written an entirely new chapter on wormholes and time travel, and updated the chapters throughout." -- Description provided by publisher.
Publisher: New York : Bantam Books, [1998]
Edition: Updated and expanded tenth anniversary edition
Copyright Date: ©1998
ISBN: 9780553109535
0553109537
9780553380163
0553380168

All About Call Numbers

Very good! Understandable for kids, and obviously adults. Kids I stressed in science or/and theories will like this book. Interesting, not just Hawking’s achievements, but also his personal life, and how hard it was for him. Since he died in 2018, his fame has grown. Read this book now! 4.5 stars because a just little, tad bit, hard for kids, only a few concepts, otherwise a 5! :D

For letgoofme:
The best proof that you do not have brilliant mind is the fact that you claim you do.

A brief history of time is a very informative book that talks about complex topics in terms that most people will easily understand. I think that Stephen Hawking is very good at writing down his ideas and theories and explaining them, despite not being able to speak. I think that the concepts explained in this book are very difficult to quantify, since humans simply cannot process some of the mechanics and the sheer scale of the universe. Stephen manages to explain advanced theories using terminology that does not require pre-existing knowledge to grasp. Despite this, though, there are some things explained in the book that did not make sense but I found that it was important not to question but to follow Stephen throughout his explanation, and this helped me grasp the topic he was discussing. However, there are some topics that Stephen cannot explain in layman’s terms. For example, how can you expect someone to explain a singularity in simple terms that everybody can understand? This is my only problem with this book, since it aims to educate people on topics that are hard to understand using a simple method, and yet it struggles to explain the topics mentioned.

I rated this book a 4/5 because it is more difficult to understand than it should be, since it aims to educate everybody on astrophysics. Apart from that, I think that this book is an excellent read and I would recommend it to everyone that is above the age of 14.

I love this book. It's not technical enough for the scientists and it's too complicated for many of those without at least a basic understanding of physics.

Professor Hawking does a fantastic job of using analogies and imagery to explain some of the most complex ideas in physics, mathematics, and astronomy.

It's not meant to be a science textbook, so keep looking if that's what you're interested in. It's also not an easy read if you aren't familiar with the fundamental concepts of physics.

I found most of this book to be unintelligible. I have a brilliant mind compared to some
of the ridiculous comments here. One would have to be an astrophysicist to really have any
understanding of the material.

For example, waht is imaginary time? Everything here is theoretical, mainly because they
do not fully understand the origin of the universe. These are educated guesses. Ask someone
to define a singularity in layman's terms. They cannot

when you read this book your brain is somewhere else in the universe....

I own a copy of this book and it’s definitely my favourite book of all time! I strongly recommend it to anyone who is a fan of Stephen Hawking

Almost as good as Boogie nights

"It's turtles all the way down!" will probably be an iconic line for me for the next bit. On my own, I would have never thought to ever read this. I am very thankful for my friend who was an inspiration to me in her brilliance and sort of recommended it. Throughout the "brief" explanations, I felt a little muddled over some parts. However, I found that overall I thoroughly enjoyed all of the mystical and fascinating explanations of theories and ideas. For a high school student, this may be a bit of a struggle so I suggest having a bit of physics background (and science) before proceeding in reading this.
- @Siri of The Hamilton Public Library's Teen Review Board

The problem with popularizations is that something gets lost in the translation. At best, A Brief History of Time reminded me of the predicament of Nuñez in H. G. Wells's "The Country of the Blind." Hawking's doctorate and subsequent work validate his own understanding. His later popularizations may have fewer problems. For now, based on this, his first mass market book, my judgment is that Hawking's knowledge of quantum relativistic physics is impossible to transmit to those of us who know so much less.

I marked the book up, noting errors and omissions, beginning with the history of philosophy and the history of science. I also tagged contradictions within the text. Worst, he seems not to know at least one fundamental fact (concerning time dilation) about black holes. It may be that in trying to explain the very difficult in very common language, the ambiguities are unresolvable. Toward the close, Hawking laments that modern philosophers have retreated from the physical world explored by Aristotle and Kant, and, following Wittgenstein, they worry more about the structure of language (p. 174-175). That might be the more relevant concern, considering Hawking's disrespect for Aristotle and endorsement of Kant coupled with the very many problems in his book.

Hawking seems to confuse chaos, randomness, entropy, and order. He seems to have a high school understanding of imaginary numbers. Or maybe it is just that he expects his readers to be at that level, but not beyond. And, the blame may best be directed at his publishers who told him that each equation in the book would reduce his readership by half. So, the presentation was dumbed down to level of gee-whiz and good-golly as we gaze like slack-jawed apes at the mind-numbing marvels of our incomprehensible universe.

yo89999 thinks this title is suitable for All Ages

Sagarpp3 thinks this title is suitable for 11 years and over

hur74Vety thinks this title is suitable for All Ages

Some people never admit that they are wrong and continue to find new, and often mutually inconsistent, arguments to support their case - as Eddington did in opposing black hole theory. Others claim to have never really supported the view in the first place or, if they did, it was only to show that it was inconsistent. It seems to me much better and less confusing if you admit in print that you were wrong.

We find ourselves in a bewildering world. We want to make sense of what we see around us and to ask: What is the nature of the universe? What is our place in it and where did it and we come from? Why is it the way it is?

A Brief History of Time by Stephen Hawking is a book about of a history of the universe, for my opinion is something amazing this book, shows how the ideas of the human was changing that first start with  Aristotle who thought that the earth was stationary so the earth didn’t move and the planets,the sun and the stars was moving around the earth,and to finish Hawking with his big theory about blacks holes that it is something awesome. For me the most impact it was when I understood how the big ideas were changing  to understand better the world.
From my point of view the best scientist has been Stephen Hawking, he is a scientist who everybody should admire because he is a disable person, but he is really smart, also he has the same respect that Albert Einstein, he has a real goal that he said “ My goal is simple. It is complete understanding of the universe, why it is as it is and why it exists at all”. In my opinion this “goal” is something unbelievable, this is why he is so smart but he has a problem or something that for me it isn't okay that he is atheist; Although,he wrote a letter where he told that God was always in the equations,It was my conclusion about his letter.
The book A Brief History of Time let me feel without knowledge about this theme,   because in the book explain everything in the universe in my world specifically. I could discover something that I didn’t know, but I always keep asking me the same question.One part told about the blacks holes that  I don’t like just because our mathematics are excellent, but the technology of the humans can’t travel  to the galaxies to test all theories that we have it.