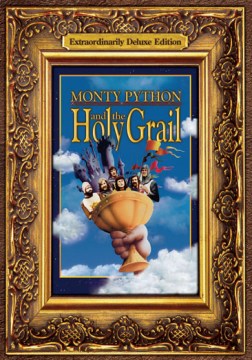 Monty Python and the Holy Grail

In this spoof of the legend of King Arthur, the king recruits the Knights of the Round Table. He is soon joined by Sir Bedevere the Wise, Sir Lancelot the Brave, Sir Galahad the Chaste and the Pure, Sir Robin the Not-Quite-So-Brave-As-Sir- Lancelot, and Sir Not-Appearing-In-This-Film. God sends them on a quest to find the Holy Grail. Along the way they encounter a plague-ridden community, the Knights who say Ni, a killer rabbit, and more.
Publisher: Burbank, CA : Columbia TriStar Home Entertainment, c2006
Edition: Extraordinarily deluxe ed
ISBN: 9781404996311
1404996311

Alternative Title: Holy Grail
Album of the soundtrack of the trailer of the film of Monty Python and the Holy Grail

One of the greatest comedy films in history.

If you like the wacky, over-the-top humor of the Monty Python comedy troupe, then, you are most certain to get a belly-full of laughter from 1975's "The Holy Grail".

This "Medieval" spoof (set in the year 932 AD) contains some really hilarious segments that have to be seen to be fully appreciated. Two of my favorite sequences from this zany film were the encounters with the Black Knight and the witch-burning scene.

All-in-all - "The Holy Grail" is definitely worth a view. It is often not for the squeamish.

I liked this 89 minute long comedic DVD. It is a send-up of the grim circumstances of the Middle Ages as told through the story of King Arthur and framed by a modern-day murder investigation. When the mythical king of the Britons leads his knights on a quest for the Holy Grail, they face a wide array of horrors, including a persistent Black Knight, a three-headed giant, a cadre of shrubbery-challenged knights, the perilous Castle Anthrax, a killer rabbit, a house of virgins, and a handful of rude Frenchmen.

GOOD 1974 Monty Python film - some fun cuts, but their surreal comedy can be hit or miss.

As with all Python, in my opinion, you have to watch it a few times in order to fully grasp the inherent silliness involved. "How do you know he is a King?" "Because he hasn't got s**t all over him."
Not going to be everyone's cup of tea, put that's the pure brilliance of Python.

If ever you don't know what I'm talking about, I'm probably quoting this movie. It's one of my favorites!

It's a good funny movie full of silly Monty Python British humor. However, I'm unsure how it gets a PG rating when they mention oral sex, and say sh!t several times, not to mention the (very fake looking) blood in many scenes, and physical violence. Monty Python is very good at insinuating sex (wink wink nudge nudge) and swear words (brown and sounds like a bell? Dung!)...

This is probably the most quotable Monty Python full-length film. As with Life of Brian, there is an element of literary/historical satire but it's mostly just silliness.

A year passed: winter changed into spring, spring changed into summer, summer changed back into winter, and winter gave spring and summer a miss and went straight on into autumn... until one day...

Dennis: "Listen, strange women lyin' in ponds distributin' swords is no basis for a system of government. Supreme executive power derives from a mandate from the masses, not from some farcical aquatic ceremony."

“Your mother was a hamster and your father smelled of elderberries.”

Taunting French Guard: "...I unclog my nose in your direction, sons of a window-dresser! So, you think you could out-clever us French folk with your silly, knees-bent, running about, advancing behavior! I'll wave my private parts at your aunties you... cheesy leather, second-hand, electric donkey bottom biters!" King Arthur: "IN THE NAME OF THE LORD, WE DEMAND ENTRANCE TO THIS SACRED CASTLE!" Taunting French Guard: "No chance, English bed-wetting types! I burst my pimples at you and call your door-opening request a silly ting! You... tiny-brained wipers of other people's bottoms!"

It seemed as though there was no escape then the illustrater had a heart attack and died ad they got away.

mikdavfle thinks this title is suitable for 16 years and over

Violence: Some kiling and limbs getting cut off, but the blood looks like juice.