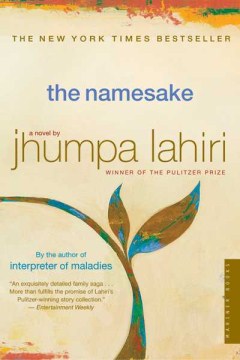 Houghton
Jhumpa Lahiri's debut story collection, Interpreter of Maladies, took the literary world by storm when it won the Pulitzer Prize in 2000. Fans who flocked to her stories will be captivated by her best-selling first novel, now in paperback for the first time. The Namesake is a finely wrought, deeply moving family drama that illuminates this acclaimed author's signature themes: the immigrant experience, the clash of cultures, the tangled ties between generations.
The Namesake takes the Ganguli family from their tradition-bound life in Calcutta through their fraught transformation into Americans. On the heels of an arranged wedding, Ashoke and Ashima Ganguli settle in Cambridge, Massachusetts, where Ashoke does his best to adapt while his wife pines for home. When their son, Gogol, is born, the task of naming him betrays their hope of respecting old ways in a new world. And we watch as Gogol stumbles along the first-generation path, strewn with conflicting loyalties, comic detours, and wrenching love affairs.
With empathy and penetrating insight, Lahiri explores the expectations bestowed on us by our parents and the means by which we come to define who we are.
&#160;&#34;Dazzling...An intimate, closely observed family portrait.&#34;&;The New York Times

Meet the Ganguli family, new arrivals from Calcutta, trying their best to become Americans even as they pine for home. The name they bestow on their firstborn, Gogol, betrays all the conflicts of honoring tradition in a new world&;conflicts that will haunt Gogol on his own winding path through divided loyalties, comic detours, and wrenching love affairs.

In The Namesake, the Pulitzer Prize winner Jhumpa Lahiri brilliantly illuminates the immigrant experience and the tangled ties between generations.
&#160;

Baker & Taylor
A portrait of the immigrant experience follows the Ganguli family from their traditional life in India through their arrival in Massachusetts in the late 1960s and their difficult melding into an American way of life.

Baker
& Taylor
An incisive portrait of the immigrant experience follows the Ganguli family from their traditional life in India through their arrival in Massachusetts in the late 1960s and their difficult melding into an American way of life, in a debut novel that spans three decades, two continents, and two generations. By the Pulitzer Prize-winning author of Interpreter of Maladies. Reprint.

Online Book Club pick for November 2020. The Ganguli family came to America from Calcutta and struggled to find their place in their new homeland. The book follows their son, Gogol, as he attempts to reconcile his parents' experiences as immigrants with his own experience growing up solely in Ame... Read More »

The author is a good writer. The book reads easily. It was a book full of emotion about family. I think the author got the emotions accurate as it pertains to leaving home to another place and it is not ever really the same. Also how the children being raised in the new place will never really understand how you got to be the way you are. In this book that theme is throughout. Maybe a bit dramatized but it certainly is the case for many that their children do not accept and are embarrassed about their family's ways and their name. I think it is a book well worth reading.

Wow. I read this book for school, but man, I fell in love with it just as easily as I have with books I read on my own time. I love a good family drama, and The Namesake checks all of those boxes. Something I think is really worth noting about The Namesake is that it is about the assimilation of a Bengali family into American society but it is not explicitly about racism. The Gangulis face microaggressions and the struggles of living amongst a different country with different values, but it does not feel exploitative. The story has so much more to it than just sadness - it is about love, tradition, family, identity, and growing up. Jhumpa Lahiri’s writing is so beautifully moving; I found myself so captivated by her words I just wanted to keep reading past our assignments. Definitely my favorite school read, and one of my new favorites overall.

A lovely novel by the wonderful author Jhumpa Lahiri. The Namesake follows the story of a Bengali family who is transplanted to the Northeast. Instead of warmth, spices and lots of family, the Gangulis are thrust into the cold, bitter Northeast climate as Ashoke, the husband, and Ashima, the wife, attempt to navigate the U.S. Lahiri does an excellent job of letting the characters speak for themselves. Gogol Ganguli strives to achieve his idealistic life by surrounding himself with others who he admires. What does a namesake mean? How does an individual form their own identity? These are two of many questions that Lahiri explores in her magnificent, luminous novel.

I liked how this book had a realistic representation of what some South Asian families in the USA with immigrant parents are like. The book shows the children, first generation Indian-Americans, drifting away from their parents’/family traditions and towards more Western lifestyles. They can’t be blamed for that because they’re living in the USA, so of course they would have great Western influences in their life. I like how Jhumpa Lahiri depicted this well, and not in a cringey way, as I’ve seen some do before. Besides that, the book is written well and the plot and characters are developed amazingly. I even shed a tear at some parts. I would give this book 5 stars.

This is a story of the immigrant experience and also a story about a father and son relationship.

Anglo-Indian writer Jhumpa Lahiri's first book of short stories, "Interpreter of Maladies," won the Pulitzer. "The Namesake" is her first novel and has similar themes, namely the immigrant experience in America. Made into a film. Also, "The Windfall."

I love this novel.

I downloaded the ebook to read on my nook, and it will not let me open it without entering my full name and credit card despite the fact that the book is a rental from the library. The file opens fine on my computer. Anyone know how to solve this issue?

Truly engaging, well written, high praise for Jhumpa Lahiri... again.
She has a gift for chronicling families struggling with the delicate balance of
being loyal to traditions of India while coming of age in America.

Richly detailed, but effortless. The film adaptation is excellent, but the book is the story in HD. Look for the train returning in different motifs, or the shoes that Ashima tries on her feet...

imaginethat thinks this title is suitable for 14 years and over