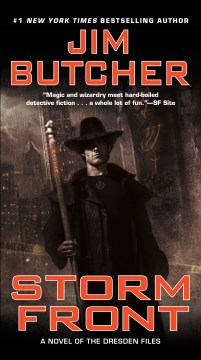 A Novel of the Dresden Files

Drink and Be Buried: Supernatural Mysteries

Mystery type: When mystery and fantasy come together, the result is supernatural mysteries. These books feature crimes and murders with magical or paranormal causes. Beings such as ghosts, vampires, werewolves, or witches are often major characters. Drink pairing: Chai tea latte Why they go together: With flavors like cinnamon, nutmeg, ginger, and clove; the kick of caffeine from black tea;… (more)

Drink and Be Buried: Supernatural Mysteries

Mystery type: Supernatural mysteries are a small yet venerable subgenre, overlapping with fantasy. These stories follow the standard mystery format, with a strange crime or murder, but often the villain or a substantial character turns out to be a ghost, vampire, werewolf, witch, or some other fantastical being. Drink pairing: Chai tea latte Why they go together: With flavors like cinnamon,… (more)

The first book in the long running "Dresden Files" books. This book is far more influenced by noir mysteries and crime fiction than the later books in the series. A quick read that delves into a great world of magic, murder, and wizards-for-hire.

As a whole, I absolutely love The Dresden Files, but this is the first book in the series and you can definitely tell. It's the start, the beginning, and while it's not the best it is a look into a very magical world.

I love the blend of urban fantasy with a noir private investigator mystery twist!

In this fast-paced hard-boiled urban fantasy, Harry is hired by a women to find her missing husband; on the same day he is contacted by Chicago PD to solve a grisly double homicide with paranormal undertones. Harry is a well-developed, snarky, and irreverent character. We are introduced to large cast of secondary characters; many of whom I’m sure will show up again in the series. My favorites was Chicago PD Detective Karrin Murphy. She heads up the “Special Crimes Unit” and has Harry on retainer. She’s a strong female character and is a good contrast to Harry, who can be chauvinistic at times. This series will appeal to fans of noir or detective fiction as well as readers of fantasy.

Harry Dresden, detective and wizard, works out of Chicago and fights against both human and supernatural villains. This first book of the Dresden Files sets up his world pretty well, as he investigates the murder of two people by black magic and gets pulled into a conflict that puts him in the line of fire between the mob, the White Council of wizards, and a warlock out for blood and power. The series is currently at book 15 and I haven't lost interest yet because Harry and the other characters are great to hang out with, and there is a thread of a much deeper and long-running conspiracy that keeps escalating from book to book. — Jody W., Web and Online Services

The Dresden Files as a whole series is a definite win. Like all long-running series, some installments are better than others, but there is a reason that this series is the standard by which most Urban Fantasy books are measured. Until I read "Storm Front", I had never read anything in the Urban Fiction genre, but the Dresden Files so impressed me, I branched out and read others. As an avid reader, finding something new to love is a thrill!

I gave this a 5 Star, not for the writing in this specific book, but for the series as a whole. Jim's first novel in the world of Harry Dresden (in the Yellow Pages under Wizard), is an absolute gem of world building. Mixing Crime Noir and Fantasy is no easy task, and Jim does a great job. Someone has been murdered. Violently. And with no leads, the police turn to Harry for help to solve it.

I will admit, that being a first novel, the writing has it's faults at times, but DO NOT LET THAT STOP YOU! The rest of the series just keeps getting better and better.

I like hard boiled detective fiction. Not so much fantasy now. Why not a blend of the two? Far fetched? Of course. Harry has great wizardly power but is far from god-like. He’s a blue-color guy. I also loved the portrayal of how his power manifests itself. How does it work and what are it’s limits? Butcher writes in a way that enables me to suspend disbelief. This is a dangerous world filled with more than sparks. There is blazing fire as well.

Meet Harry Dresden, a down-at-the-heels wizard for hire with a good heart that often leads him into trouble in his magical consulting business. This is more complicated because he has a wizardly parole officer who is just waiting for him to mess up. First of a gripping magical noir series.

gradientcat thinks this title is suitable for 18 years and over

ShoabK thinks this title is suitable for 16 years and over

Frightening or Intense Scenes: Umm, talk about the sex scenes but not the graphic detail of a murder? What's wrong with you people?

Violence: The action scenes can get graphic but nothing to be squeamish about.

REVIEW: THE DRESDEN FILES- STORM FRONT
I was first introduced to this series via the short-lived television show, circa 2007. I enjoyed Paul Blackthorne's (Arrow) portrayal of Harry Dresden. He had a devil-may-care swagger that made the character of this wizard/investigator intriguing. This is who I thought of as the title character as I read the first book in the popular series by author Jim Butcher. Jim was involved in the production of the series.

I also enjoyed Valerie Cruz as Lt. Connie Murphy, Dresden's sometime friend, sometime employer, full time bad-ass cop. When I read this book though, Connie was now Karrin, although I suppose it's really the other way around. My secretary, Ms. Google, uncovered the tidbit that the television name change was due to a real Chicago police officer having the name of Karyn Murphy. I would have been flattered to have the same name, but maybe the constable wasn't. I can't quite figure that one out, unless Butcher changed her name in the later books. But I doubt that.

If you missed the series, here's a clip. (Those of you reading this on a non-interactive site can access the review, pictures, videos and all at www.supernaturalcentral.blogspot.com). If you haven't read the books and don't want any images in your head, this is your official SPOILER ALERT!

Sadly, apparently I was one of the few viewers that watched the series. It only ran for one season. I guess The White Council were behind the purse strings on that one.

When I stumbled into my local Chapters and saw the first book in the series, Storm Front, I picked up to give it a read. For me it was unmemorable. So much so, that flash forward a few years and I'm in that book store once again and what did I do? I thought about how much I liked the series and bought the book again.

But as I am possibly re-reading the book for the second time, I begin to think something has changed, and I think it's my frame of mind. This time the characters, even Bob the skull-head, who wasn't a particular favourite of mine in the TV show, are coming to life on paper better than they did on my first go-around. I liken it to being in a movie theatre when you're just not into the flick for no fault of the movie.

There is a gruesome double murder in the city that the police can explain, so Murphy calls on Dresden to see if he can determine who committed the crime because it doesn't look like the works of mere mortals like the local Mafia boss Johnny Marcone. Dresden is glad to be back on the police payroll as pickings have been slim at his investigation agency, at least until long, cool Monica Sells shows up at his office throwing a wad of cash at him to try to find her missing husband.

Whomever is behind the murders isn't content to let the count stay at two, and before long, Harry's involvement puts him on the hit list. If that doesn't kill him, The White Council, governors of all things supernatural, are standing in line to do the same thing. That is if Murphy doesn't arrest him first. No, it does not look good for Harry.

Obviously, as there are more books in the series, Harry survives. But it's a fun ride to see how he gets out of the mess he's gotten himself into.

I'm giving this three howls, moving onto the second book in the series and hoping for greater things. As it turns out, I HAD partially read the book before. Mr. Butcher gets double royalties on that one. My bad.

pg 3
The end of the twentieth century and the dawn of the new millennium had seen something of a renaissance in the public awareness of the paranormal. Psychics, haunts, vampires-you name it. People still didn't take them seriously, but all the things Science had promised us hadn't come to pass. Disease was still a problem. Starvation was still a problem. Violence and crime and war were still problems. In spite of the advance of technology, things just hadn't changed the way everyone had hoped and thought they would.