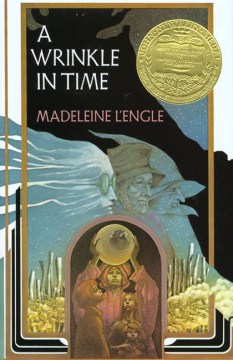 A Wrinkle in Time

Baker & Taylor
Meg Murry and her friends become involved with unearthly strangers and a search for Meg's father, who has disappeared while engaged in secret work for the government.

It was a dark and stormy night; Meg Murry, her small brother Charles Wallace, and her mother had come down to the kitchen for a midnight snack when they were upset by the arrival of a most disturbing stranger.

"Wild nights are my glory," the unearthly stranger told them. "I just got caught in a downdraft and blown off course. Let me sit down for a moment, and then I'll be on my way. Speaking of ways, by the way, there is such a thing as a tesseract."

A tesseract (in case the reader doesn't know) is a wrinkle in time. To tell more would rob the reader of the enjoyment of Miss L'Engle's unusual book. A Wrinkle in Time, winner of the Newbery Medal in 1963, is the story of the adventures in space and time of Meg, Charles Wallace, and Calvin O'Keefe (athlete, student, and one of the most popular boys in high school). They are in search of Meg's father, a scientist who disappeared while engaged in secret work for the government on the tesseract problem.

A Wrinkle in Time is the winner of the 1963 Newbery Medal. It is the first book in The Time Quintet, which consists of A Wrinkle in Time, A Wind in the Door, A Swiftly Tilting Planet, Many Waters, and An Acceptable Time.

A Wrinkle in Time is soon to be a movie from Disney, directed by Ava DuVernay, starring Storm Reid, Oprah Winfrey, Reese Witherspoon and Mindy Kaling.

This title has Common Core connections.

Baker
& Taylor
An unearthly midnight visitor takes Meg, Calvin, and Charles across the barriers of space and time to another world

Online Book Club pick for December 2018. Meg Murry must travel through the universe and face terrible danger in order to save her father, and the world, from unspeakable evil.

More relevant than ever.

I did not enjoy this book because all the facts were all jumbled up. It was really confusing and just kind of weird.

An exciting storyline and many interesting celestial creatures make this story great fun to read. It has relatable young characters whose adventure helps them develop self-confidence and realize their full potential, a hallmark of classic children's literature.
I loved how the setting constantly shifted between unique planets, allowing the children to learn more about the universe and the mystery of their father's disappearance.
L'Engle demonstrated terrific character development through the protagonist, Meg Murry. She was very self critical in the beginning, believing she was unable to be happy and successful without her father's guidance. Her confidence was restored however, when she realised that she is the only one who can save her brother. In the end, Meg knows that she can be the change that she wants to see, and she doesn't have to rely on others.
Overall, I thought A Wrinkle in Time was a perfect mix of fantasy and science fiction, had very complex and real-feeling characters, beautifully descriptive imagery, and a theme important to all young children. 5/5 Stars. @outdoorsman14 of the Hamilton Public Library Teen Review Board

It was a ridiculously dull, boring book and I’ll simply never understand it’s hype. The fact that ‘Disney’, the number one ruin of most popular books, had a movie made based on it should already raise red flags. Meg the protagonist is extremely annoying; she literally gasps and cries about everything, after about 10 minutes I got tired of her and her antics. At first she actually seemed likeable, but then my hope fizzled out halfway through the book. Her friend Calvin is also equally irritating and at one point while reading the story I found my self really rooting for the ‘evil’ (the villain.) The so called ‘evil’ made absolutely no sense whatsoever and could have been written better but oh well. 2/5 Stars. @Bloop of the Hamilton Public Library Teen Review Board

Great book. Want to read the next one.

When I picked up "A Wrinkle in Time" by Madeleine L'Engle, it was little more than a title I had heard around. Being from 1960, I knew of it growing up, but I never knew anything about it. Now reading it as an adult has been a treat. The narrative is powerful and curious. The characters are vibrant. The evil power "It" is chilling and dangerous. I'm so glad I finally got to this prolific book!

This is wonderful tale of children time travelling to save their father.

Monarch_47 thinks this title is suitable for All Ages

indigo_dove_166 thinks this title is suitable for 8 years and over

FaithR thinks this title is suitable for 11 years and over

lanaleif thinks this title is suitable for 10 years and over

rebecacelest thinks this title is suitable for 8 years and over

blue_dog_31717 thinks this title is suitable for All Ages

Bookworm12130 thinks this title is suitable for 10 years and over

mayog thinks this title is suitable for 9 years and over

Faith is the Sister of Justice

Like and equal are entirely different things! --Meg to IT/Charles Wallace

One night, a mysterious stranger arrives at the Murry household. Meg and her little brother Charles Wallace quickly become involved, and with the help of Calvin O'Keefe they assist three women to help a planet taken over by an evil consciousness called IT, which seeks to erase all uniqueness. Along the way Meg finds secrets about her father, love, and being who you are.

Meg Murry and her friends become involved with unearthly strangers and a search for Meg's father, who has disappeared while engaged in secret work for the government.

Meg and Charles Wallace set out with their friend Calvin in a search for their father. His top secret job as a physicist for the government has taken him away and the children search through time and space top find him. ( Novelist Review)