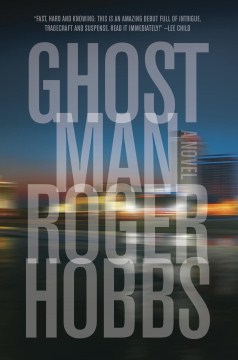 I'm hard to please when it comes to this genre', but I found Ghostman a delicious treat of a story. I liked the background detail Hobbs provided. His short chapters, which keep the plot moving, reminded me of my favorite crime writer Robert B. Parker.

THIS WAS A LIBRARY RECOMMENDATION!
There was a lot of action (ie: violence) but the story moved quickly. I enjoyed this one but don't know if I'll read the second book.

Too violent for me.

Unreadable dreck. Don't waste your time. If this is a best seller there is no hope for our society. Appears to have been written by a 13 year old attempting to write a Hollywood grade C action script. The writing is quite mediocre, the plot is preposterous. Completely unbelievable and absurd. Many details pertaining to Seattle, automobiles, weapons, communications etc are obviously wrong. Poorly researched. A compelling non recommendation. You are forewarned.

Roger Hobbs' debut novel is rollicking crime thriller that moves faster than Usain Bolt after a triple espresso. The story revolves around a "ghost man", a shadowy underworld figure who has the ability to assume disguises, stay off the grid, and be a part of your heist to steal millions of dollars from the most secure places on earth - for the right price.

The ghost man of the title gets an unexpected call from a underworld figure that worked with him before - a job that went spectacularly bad for everyone involved. But the crime lord wants to work with him again, this time tracking down what went wrong with another job where millions of dollars of stolen money went missing. The ghost man is now the hunter, using his skills to track down a blown heist. Crosses and double-crosses abound, and Hobbs is a master at ratcheting up tension yet never slipping into hollow Hollywood cliche, keeping his characters solid and believable and the action purring. This was a fun read and hopefully produce a sequel that I'll be waiting for.

I loved "The Usual Suspects" but I certainly did like this book, not a bit. Didn't like the writing, wasn't taken with the characterizations, just could not hold my interest.

This author is only 23? 23!!!!!!!! This is an incredibly accomplished work, not a wasted word and a sense of plot to be envied by anyone. I am jealous, envious, any word that can convey how much I wish I could write like this. Only a first novel, hopefully many more to come. Highly recommended.

For me, this was a slow started. But once into it, I enjoyed it. I'd bet there is a movie made of this one soon.

clever, fast-paced and unusual. not what i expected, looking forward to more from the same author

I thought this was a really good read by a debut author. I tore through it in a few days & hope this is only the first in a series about the "ghostman." I read that he already has a movie deal on this one!

If you liked The Usual Suspects, you will love this novel. Intelligent, elegantly written and almost perfectly paced, it is, as the description suggests, a thoroughly addictive ride through a world of disappearances, multi-million dollar bank robberies, and double crosses galore. Highly recommended.